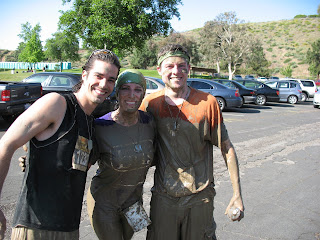 Joe, Oscar and I after the race.
When Joe showed an interest in wanting to run a race, my first reaction was shock followed quickly by excitement.  I was game for which ever race he wanted to do.  When he selected a 5K mud run, I thought, “How hard could this be after finishing the marathon?”
I spoke way too soon.  When I went to the race website to register, the race was advertised as, “an opportunity to race along side of the military, public safety officers and police academy trainees.”  I began to think who ever wrote this misused the word ‘opportunity’.  In my book, opportunity is something that goes with hand-and-hand with self pampering.  I just didn’t see how a boot camp style run along side of some of the toughest people ever fits this description.
When I read on, I learned that there would be military style obstacles, commanding cargo climbs, wild water crossings and mud, mud and more mud.  Crap, none of this was good news!  When I completed my registration, deep down I thought that instead of paying to do this race, they should be paying me.  Oh, the crazy things we do for the people we love!
The morning of the race I saw the obstacles and looked around the crowd and I knew then exactly what I was getting into.  First off, it was fairly easy to park.  At a race, this is always a sign that the race is either really lame or really hard.  Then, there were no people who were overweight, over age 45 and about it was about a 2:1 man to woman ratio.  This was a pretty good indication of the latter.
We signed release waivers indicating a high chance of injury or death to those who weren’t in peak physical condition. I got a glimpse at the last couple of obstacles on the course, which included one of the world’s biggest mud pits, a slippery incline that you had to climb up leveraging a rope and then jump 6 ft to the ground, and a lake that you had to cross to get the finish line.  I then understood why the release was necessary.  However, it was too late to turn back.
The race definitely lived up to its name.  In addition to climbing some of the steepest terrain inclines ever, the obstacles were no joke.  We climbed up a mud hill while fireman were spraying us with a hose.  We had to hoist ourselves over a 6 foot hurdle using our upper body.  We crawled on our stomachs through mud pits.  We ran through lakes.  We even endured injuries.
By about mile 1, I was ready to be done and I actually think it was as physically challenging as the marathon.  The craziest thing is that today I am more sore than I was one day after the completion of the marathon.  I am not sure if this is a sign of me getting out of shape or a reassurance that I chose the right career because I definitely can’t hack it in the military.  I know one thing, hat’s off to the military, they kicked my butt with this run!
Many congrats to Kimberly and Jonathan for completing the Nashville Half Marathon and to my lovely husband for completing his first self elected race. Enjoy some more photos below.
Leanne and I after the race! 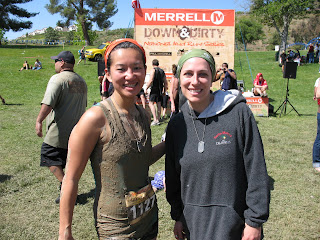 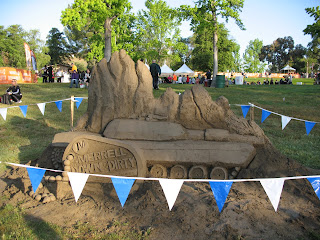 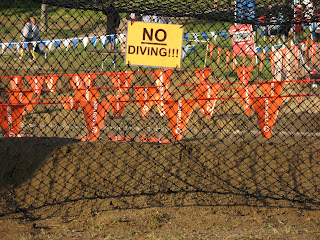 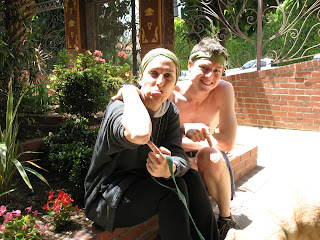